Gold will remain focused on the movements in the dollar and US treasuries for short term trading bias. Investors with a longer-term outlook will favour accumulating on any dips as a hedge against both the geopolitical and macro-economic risks.
The noble group metals have the slowdown in the global economy and supply constraints playing tug of war with price action. Up until now, concerns surrounding global growth have overshadowed the supply issue.

Baseline View: Industrial Metals:
Low inventory levels, the war in Ukraine, and the sanctions against Russia are underpinning base metal prices, while economic growth concerns and tighter monetary policy from the likes of the Fed are providing the cap. Looking forward, the growth concerns may begin to ease as China starts opening Shanghai, however, we are still many months away from “normal economic conditions”. We do not expect volatility in the base metal basket to temper anytime soon. 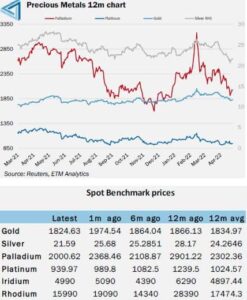 Gold has dipped below the $1850.00/oz mark since our last report touching its lowest level since February. Investors remain focused on the dollar in tandem with US Treasury yields as short term proxies for gold. As it stands a stronger dollar and higher US yields are both gold negative given that the yellow metal is priced in dollars and is non-interest bearing raising the opportunity cost of holding it as an asset. The Federal Reserve is the ultimate driver of both of these factors with the market pricing in a hawkish Fed who needs to rein in the inflation monster.

We believe that there is a strong case to suggest that the market has overpriced the Fed’s intentions and thus the dollar may be due a correction in the coming months, which would make current levels attractive for gold.

Our view: Longer-term investors with a buy and hold strategy remain committed to buying on any dips as seen on the 29th of March when gold dipped below the $1900.00/oz mark. To the topside $2000.00/oz remains the first hurdle before the door to year-to-date high of $2070.44/oz is opened.

The World Platinum Investment council stated on the 16th of May 2022 that both supply and demand of platinum had fallen sharply in the first quarter of 2022. On the supply side, there were challenges in South Africa which resulted in supply falling by 13% to 1.28mn ounces from 1.46mn ounces in 2021.
The fall in demand was even more acute, dropping by 26% year on year to 1.52mn ounces from 1.7mn ounces driven by weak industrial, jewelry and investment demand.
The geopolitical uncertainty as a result of Russia invading the Ukraine drove the macro backdrop for the quarter. Concerns around longer term off take agreements with Russia remains a focal point given the potential for non-performance from both sides.
Looking ahead, the WPIC stated that mining challenges will be a factor with three major South African producers all lowering production guidance given maintenance projects taking out capacity and ongoing labour negotiations.
WPIC cut its outlook for the full year, with the total surplus projected to fall to 627 000 ounces from 652 000 ounces, which is roughly 50% of 2021’s surplus. 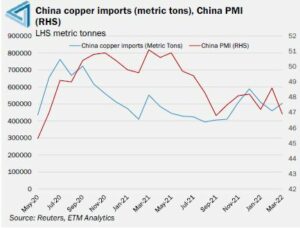 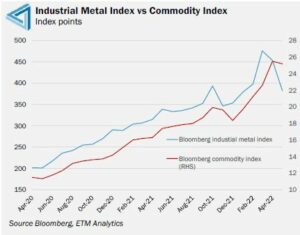 Base metals have experienced a number of factors driving the market over the past couple of weeks with some having more of an influence than others. The first two points below have been at the forefront of debates at morning meetings while the last point has lost some prominence.

COVID-19 and the Chinese growth conundrum:

Chinese authorities are steadfast in their quest for a zero COVID-19 environment. As of the middle of May, Beijing has shut down businesses with millions being told to work from home. To date, the authorities have been reluctant to call the restrictions in Beijing a lockdown given the state of angst they are experiencing as a result of the lockdowns in Shanghai. Economic data out of China has clearly demonstrated the impact of the lockdowns.
There may however be light at the end of the tunnel, Chinese authorities have given the go-ahead for businesses to start opening as of the 16th May 2022, but it will take some time before “business as normal is possible”.

Inflation and the United States Fed:

The US inflation print came in slightly higher than consensus estimates at 8.3% y/y in April, although still reflecting a compression relative to 8.5% y/y in the prior month. On a month-to-month basis, prices rose 0.3% from March to April, a still-elevated rate but the smallest increase in eight months. Beyond current price pressures, the data still fits the narrative that disinflationary forces can be expected globally over the next few months. Base effects in the oil price are primarily the driver here, and decelerating inflation may lead policymakers to rethink their hawkish pledges. The Fed will be looking at higher interest rates although they have ruled out hikes of 75 bpts, USD strength, real wage compression, and signs of corporate distress as reflected in equity markets. Lest we forget that the yield curve inverted in the last few weeks, portending a potential economic recession.
So the status quo remains, for now we are in a tightening phase which will curtail economic growth prospects which is base metal negative. We however don’t believe that it’s all doom and gloom with the Fed potentially not moving as aggressively as the market has priced.

The consequences of Russian sanctions:

The impact of the London Metals Exchange suspending the placement of Russian branded base metals in its UK warehouses is hampering the restocking of certain base metals of Russian origin such as nickel and the expectation is that it will feature in the coming months. This came after the UK government announced a 35% extra duty on several Russian and Belarussian imports which include lead, copper, primary aluminium and aluminium alloy.

In the next section, we unpack the metals which are the most prominent on the month. 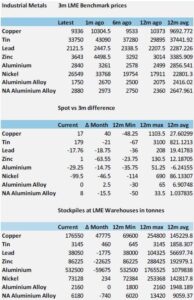 Nickel
The wild moves in nickel have seen the London Metals Exchange relooking at the market following what could only be termed a debacle following the short squeeze which caused the closing of the pit for just under a week and the cancellation of billions of dollars’ worth of trades.
The exchange is proposing a more rigorous framework for reporting of all OTC positions, it also proposed that holders of large OTC positions should tell the exchange why they held them. This is understandable as the trade that caused the run was an OTC trade and thus the exchange would have no line of sight nor have a clear view as to any systemic risks the trade posed for the LME.

Our view: The nickel market has settled below the $30000/tonne mark and investors remain wary. Liquidity in lower and the costs of trade are higher given the margin deposits required by the LME. There has been talk of another contract being launched by the CME, but it is early days still.

Aluminium
Aluminium inventories at LME registered warehouses are at 17-year lows and they are expected to drop further in the coming weeks as more of the metal leaves the system heading for Europe where supplies are scarce. European smelters have not been able to produce at adequate levels given the massive surge in energy costs. LME stocks have fallen by 72% since last March to current levels of 532 500 tonnes, analysts have pointed out that even more concerning is the on-warrant stocks, which is the metal available to the market at 260 075 tonnes is the lowest on record and likely to fall further.

Our view: The soft trading patch caused by the Chinese lockdowns is likely to fade and investors will turn their focus to the low stock levels in the coming weeks. We expect the bias to be topside focused with value to be found at current levels.

Copper
Concerns surrounding global economic growth have been the major theme driving copper prices over the past month. The 3m LME contract has slipped by around $1000.00/tonne over the past four weeks hovering just north of the $9000/tonne mark at the time of writing. China’s industrial output and consumer spending levels slumped in April on account of the strict lockdown measures put in place while the growth in the United States is expected to pare back as the Fed targets inflation.
That said, there has been some positive news over the weekend coming out of China, Beijing’s financial authorities have allowed a further reduction in mortgage loan rates for some buyers in an attempt to revive the property market while there has been an announcement that Shanghai will gradually begin reopening businesses such as shopping malls and hair salons from the 16th May 2022.

Our view: Value could be found around current levels as China reopens and the market reassesses global growth risks.

Gold will remain focused on movements in Dollar and US treasuries for short-term trading bias
June 24, 2022

ZAR moved from being overvalued back into undervalued territory
June 14, 2022

Potential ZAR recovery into the tail-end of the year
June 6, 2022
Recent Posts
Go to Top