What interest rate would derail the global economy? The natural rate of interest- R*

Now that it is becoming evident that the Federal Reserve will start to tighten its monetary policy, the markets are already beginning to question what level of interest rates will start to choke the highly indebted global economy. The market tends to pay a lot of attention just to the headline inflation number, but monetary policy is more complex than that. In the Feds case, it also has full employment as a policy target, but more importantly, the central bank must ensure financial stability in a world full of asset bubbles. Since Greenspan and other central banks started to bail out the financial markets after the 1987 crash, markets always expect central banks of advanced economies to bail out the financial system during a time of financial distress. In the last 30-40 years, consumer inflation was in a downward trend, and it was always possible for central banks to add liquidity to bail out the economy and the financial markets. With the current inflationary pressures caused by the well-known supply issues, it would be far more complex for the central banks to support the financial markets if there is a major correction.

The question everyone is struggling with currently is to determine what interest rate would derail the economy. To determine that, we have to look at the theoretical correct interest rate in the economy. This interest rate is known as the natural rate of interest, also known as the R*. The definition of R* is “the natural (neutral) rate of interest, is the rate that supports full employment with maximum output while inflation is constant, for example, at the Fed’s 2% target rate”. Although the natural rate concept comes from the late 1800s, the markets paid very little attention to it until the early 1990s. That is when inflation targeting became the dominant monetary policy approach. The central banks started to pay more attention to the R* as the velocity of money peaked in 1998 and interest rates declined to historic lows.

The question is why such an academic concept as R* is of any importance to the markets. As mentioned above, monetary policy is more complex than just the inflation rate, and central banks must have this “theoretical rate” to determine whether monetary policy is accommodating or restrictive. The Fed’s role in asset performance can also not be under-estimated, and the financial market players are starting to pay more attention to the natural rate.

The natural rate is also an indication of the long-term growth prospects of an economy. It is clear from the chart above that the natural rate has declined dramatically since the 1980s and the last number the NY Fed released is just 36 basis points. Although the markets always hope that the global economies will return back to trend growth, the last decade has made it clear it is just not going to happen.

There has been a well-established band in the spread between the nominal US10yr rate and the US natural rate since the early 2000s. At 2.75%, the cost of capital was just getting too high and triggered financial distress, and at 1%, central banks would worry about a deflationary bust and added liquidity. The pandemic triggered a break out of this band, but with the current bond yield, this spread is now getting close to the previous peak at 2.5%. In short, it will only take a few hikes by the Fed to derail the markets and the economy.

Central banks and academics are doing a lot of research on the natural rate to determine why it has declined so much and why (growth) remains so low. Just to put it into perspective, the natural rate was over 6% in the 1960s.

One of the presentations at the Fed’s Jackson Hole conference this year was on the topic of the very low natural rate. The study determined that there are several reasons for this, from demographics to inequality. Firstly, the “baby boomers” is a big part of the US population, and as they are retiring, the spending patterns in the US are changing. Since the US is the world’s biggest consumer, it subsequently has an effect beyond the US borders.

Secondly, the study has also found that excess savings have become a drag on the global economy, and these excess savings were building up in two places. The export nations around the world accumulated lots of USD reserves but never consumed this money which would have fuelled the economy; they washed it back into financial assets. Ben Bernanke referred to this as the “savings glut”, which profoundly affected the world’s economy. The income inequality in the US and other countries leads to lower consumption as most of the income goes to the top 10%, and this income group has a very high savings rate. The majority of wage earners has not seen any growth in their income, and with the current high inflation, they are going backwards.

Thirdly, debt has a diminishing return. As the global debt super-cycle started after the abolishment of the gold standard, the higher debt burden became a drag on the economy. As the debt burden grew, the velocity of money slowed. The government’s role in the economy has also grown since the early 2000s, and it is here where the diminishing return of debt is very evident. In the Reagan era in the early 1980s, every dollar of government spending added 80-cents to the GDP; today, that number is down to the lower 30’s and falling.

Lastly, velocity (grey line on chart) is an indication of how quickly money works through the banking system and is a major driver of inflation and the GDP (blue line), and is one of the reasons consumer inflation has remained low since the financial crisis. The QE money just did not make its way past the financial assets to work through into the real economy. The latest fiscal response changed the inflation outlook dramatically. Every citizen in the US effectively received $50 000, which fuelled inflation as there was an excess of money chasing a limited supply of goods. If the velocity of money and the R* remain this low, inflation is likely to come down over time. 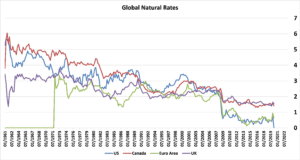 The falling R* is not unique to the US. The natural rate in all the major advanced economies is declining. As pointed out above, demographics are a powerful force, and Japan is an excellent example of how difficult it is for an ageing society to grow.

The trend of the last thirty years of ever falling growth is not likely to reverse if there is not a significant improvement in productivity and or a change in demographics, which is not likely. Therefore, we do not expect the current inflationary cycle to be sustainable beyond the supply constraints. 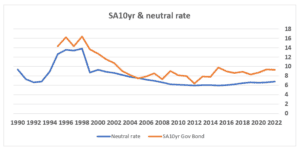 The South African neutral rate declined dramatically after the 1998 South East Asian- crisis and as the commodity super-cycle played out in the early 2000s. Since the Global Financial Crisis, global growth remained anaemic, and the deflationary forces stemming from the global debt burden and demographics led to a stable SA neutral rate. The SA bond market has been pretty stable over this period other than the shocks from the Nene incident and the pandemic. As already mentioned above, we do not expect a sustainable inflationary cycle beyond the current supply issues. To have a sustainable inflationary process money supply has to keep on growing, but this is not the case, and as the central banks tighten, the global money supply will contract further.

What does Gold/Oil tell us?
November 9, 2021
Recent Posts
Go to Top