It has recently become fodder of the market press that Softbank, the Japanese Investment and Private Equity conglomerate has been purchasing enormous quantities of call options on US mega-tech shares, such as Apple, Amazon, Google, Facebook and even the Nasdaq Index itself.

This sustained call option buying has put a fire under the market, driving it to levels which are indefensible from a valuation perspective.

This type of market activity is not without precedent though. As a start to our note we recall perhaps one of the greatest option squeezes of all time, when Porsche attempted a takeover of Volkswagen through what could be called ‘sharp market practice.’

We start with an analysis of the Porsche-Volkswagen saga from 2008. Then using the principles and lessons that could be taken away from that we apply it to the latest phenomenon of using options, in substantial quantities, to generate a market condition which defies all rational understanding.

The common theme through both examples though is that some market participants are caught in positions that they cannot escape from without suffering extreme losses. Panic overcomes rationality and everything ends in tears.

Porsche announced that it had accumulated a 20% voting stake in VW.

Porsche had further amassed a further 10% triggering a mandatory offer to other shareholders which ultimately failed.

In March, Wendelin Wiedeking (Porsche CEO) got supervisory board approval to increase Porsche’s holding of Volkswagen to 50%, reaching 35% by September 2008

The two classes of shares should trade in relative lockstep based on projected cash flows to them. In reality, this was no complete ‘arbitrage’ as there was a persistent risk of unsatisfactory tradable market liquidity in the preference share tranche.

As the spread widened to ever greater levels increasing numbers of traders and funds were getting in on the seemingly no brainer trade.

Doing this in the dark as there was still no clarity on what Porsche and Wiedeking were up was becoming an increasingly dangerous game. Adding to this ‘fog of war’ was that a sell-off in equities, triggered by the collapse of Lehman Brothers, was tearing across markets.

However, over the week starting October 20, it seemed as if the fundamentals had caught up. Volkswagen’s ordinary shares fell from €275 to €210.

“The ordinaries finally started to break, and just a week later, the spread was collapsing . . . so on that Friday the 24th, we felt like this madness was on its way out, and we would soon return to normalcy. We thus concluded it was safe to size up, and we tripled our size and shorted two more tranches, one at €233 and one at €206.”

By that time an estimated 12% of total issued shares were sold short, around $10bn worth.

But then on Sunday afternoon, an explosive Porsche press release hit the news wires:

“Due to the dramatic distortions on the financial markets Porsche Automobil Holding SE, Stuttgart, has decided over the weekend to disclose its holdings in shares and hedging positions related to the takeover of Volkswagen AG, Wolfsburg.

Upon settlement of these options Porsche will receive in cash the difference between the then actual Volkswagen share price and the underlying strike price in cash. The Volkswagen shares will be bought in each case at market price.”

With 12% of total shares outstanding sold short, it was impossible for every short-seller to cover and thereby close their positions out.

For those who had not already been squeezed out there was still worse to come.

On the following day, Tuesday 28th, the ordinaries exploded higher to reach an intraday high of €999, before closing marginally lower to €940 at close. Traders who had sold short just the previous Friday were losing €3 500 000 on each nominal of €1 000 000 face value from that day.

At the time that VW was trading at €999 it briefly became the largest company in the world by market capitalisation (USD 420 billion), greater than that of Exxon Mobil and at a giveaway price of 100 times earnings.

More often than not panic in the equity market is associated with uncontrollable sell-offs where equity valuations can move from rich to exceptionally cheap in the blink of an eye. The Volkswagen event proves that trading terror can also flow the other way.

We used to think that losses on long positions would be limited to the zero bound but the experiences of WTI futures in the middle of April shows that not even this is completely true.

Once again Exxon Mobil is in the shade of a carmaker. Its current market cap is USD 163 billion versus Tesla’s USD 479 billion. Despite Tesla’s enormous market capitalisation, the S&P benchmark committee declined to include the California carmaker in the S&P500 index. Why?

One theory may be that despite having qualified for inclusion in the index by dint of four successive quarters of profit, the source of that profit is probably not regarded as sustainable.

Over three quarters of a billion dollars of its first half 2020 profits came from selling regulatory credits to other entities.

Of 88 million cars sold world-wide in 2019, Tesla chipped in with 367 500 vehicles, 0.4% of the total, and yet Tesla’s market cap currently exceeds the total market capitalisation of the next 6 top ranked car makers.

The surge in Tesla’s share price since mid-March while extreme is not the only story in town. The Nasdaq as a whole has risen almost exponentially, driven in large part by the mega-cap shares such as Amazon, Apple, Facebook and Google.

Retail enthusiasm for these shares has in part been fueled by various stock splits, which make shares such as Apple (4-1 announced at the end of July) much more affordable.

However, it appears that something much larger has been at play. It also involves the use of options, harkening us back to the Volkswagen Option Massacre of 2008.

Softbank, the Japanese investment and venture capital outfit has been hoovering up options, call options in particular, in such volume that it has dramatically influenced the dynamics of the Nasdaq cash and futures markets.

Here is how it works.

At the beginning of May, Softbank purchases call options on Apple stock. (Call option gives the right to Softbank to purchase Apple shares at a specified date in the future and contract rate, or the strike)

This specific option in our example will mature on the 2nd of September 2020 and Softbank has contracted to purchase the Apple shares at US$100. If the share price at option maturity is greater than US$100 then Softbank’s profit will be that price less the strike less the amount Softbank paid for the option.

For the bank who sold the option to Softbank they have only a few alternatives to protect themselves against losing money on the options they have sold.

The most obvious is to go into the equity cash market and purchase Apple shares.

The higher the share price goes the more shares the bank has to purchase as the Call option is becoming progressively more certain of being exercised.

If Softbank has purchased more call options from banks than is normally the case, and strains the share liquidity that is available, there is a good chance that the market will take on a life of its own.

An ever-increasing purchase of physical shares drives the share price higher which increases the losses incurred by the banks which is mitigated by another round of share purchases.

This is referred to as a ‘feedback loop’. Depending on who you are in this transaction this is either a positive or deeply destructive feedback loop.

The chart below records the price trajectory for Apple from the beginning of 2020 to the present day. It is clear that there has been extremely high demand for Apple shares between May and this week. It fits the story we have told with our option example. 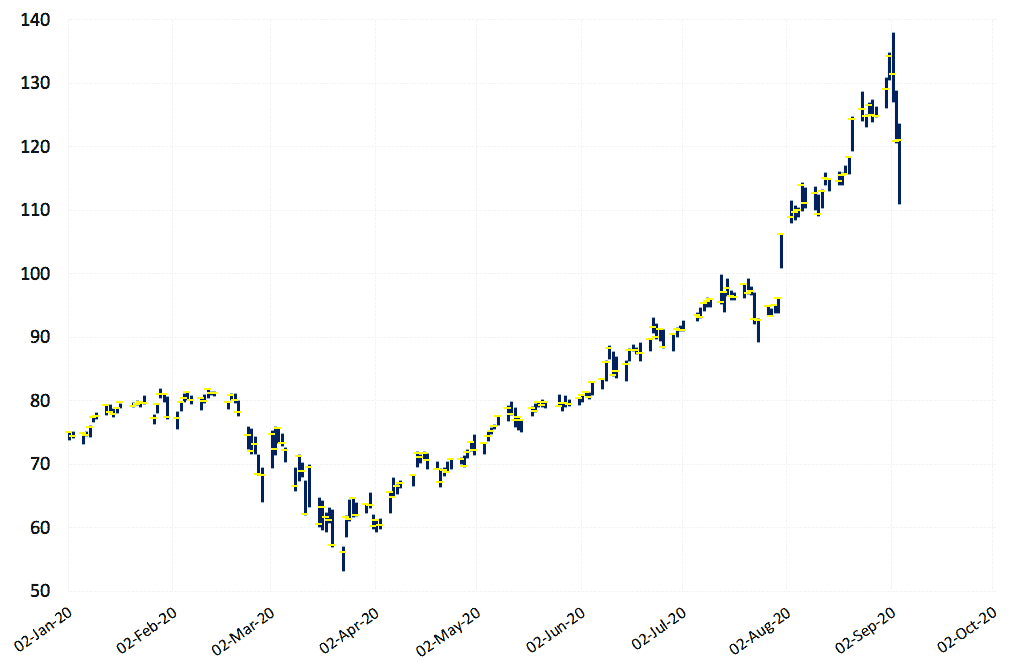 No multiply what Softbank has been doing in Apple shares, with similar trades in Google, Facebook and Amazon by a factor of 100. At a stroke it becomes crystal clear what may have driven a rally, which has exceeded the dreams of even the wildest optimists.

At some point however, the music will stop. In a market where everyone has been buying without regard to sane valuation, there are precious few market participants left to buy.

What follows is a sell-off, which cannot be resisted. Share prices will fall until reasonable valuations are restored or even way below fair.

That restoration of fair value may have started on Thursday evening or there are still several acts to follow on the topside.

The ultimate shape of the sell-off will however not change. It will be swift and brutal.

Of that, we are convinced.

How to select a treasury management system
November 1, 2021

Gold-price is tied to inflation-linked bonds: Is the globe experiencing an inflationary cycle like it did in the 1970s?
October 14, 2021