Following the last MPC decision and the accompanying statement, rate hike expectations have intensified or at the very least remained buoyant.
The SARB aims to be pre-emptive and contain inflation by reducing negative real interest rates to something it deems more sustainable and normal. That implies several more rate hikes, although that should not be considered a guarantee that the SARB will push through with all they have signalled. 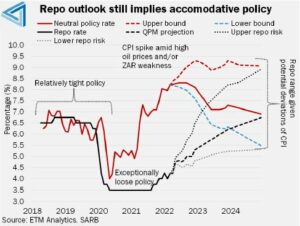 The accompanying chart shows that while growth risks are intensifying, monetary policy in SA remains loose when looking at the spread between the Repo Rate (black line) and the neutral policy
rate (red line).

Currently, SA’s neutral rate sits at around 6.75%. This implies that the SARB will have to hike the Repo Rate by 200bps to get rates to a neutral level. Our base case scenario suggests that the SARB will raise rates by a further 175bps in the current rate hiking cycle. The tightening is expected to come to an end in Q1 2023, with inflation likely to cool in the first few months of next year as the high base effects take hold.

According to the latest run of the inflation risk indicator, the balance of forces remains in favour of higher inflation. A combination of high energy prices, high food prices, shipping costs and supply chain disruptions mean that input factors of production are high and that inflation will therefore remain higher for longer. 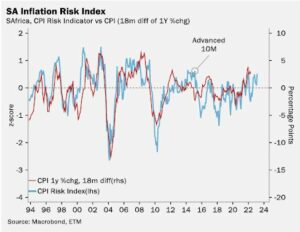 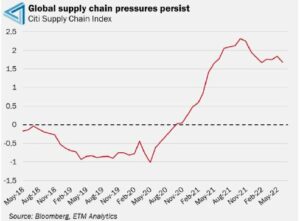 It is often useful to find a tool that helps unpack value ranges quantitatively, preventing emotional decision-making when hedging. Traditionally, understanding value has been a somewhat nebulous concept that comes down to a range of factors, including what kind of tolerance a business has for unfavourable currency movements. The indicators that follow attempt to identify different periods that might offer relative value, either for importers or for exporters. 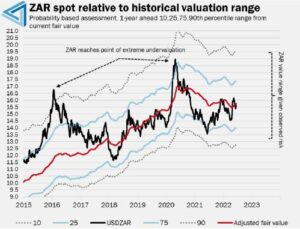 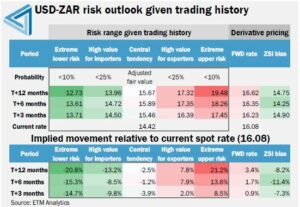 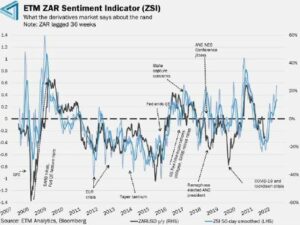 Since the previous report, the ZAR enjoyed a significant appreciative move followed by a major correction late last week that undid much of that. It moved from being overvalued back into undervalued territory, and the move was dramatic enough to raise some eyebrows.

ETM’s ZAR Sentiment indicator (ZSI) has remained firmly in positive territory and even rose to suggest an appreciative bias will manifest over the next 6-8 months.

It suggests that any depreciation in the ZAR in the near-term will not be sustained in the future, especially if the ZAR finds itself in undervalued territory. It is telling that the ZSI has remained in positive territory throughout the past month despite all the difficulties. It suggests that there is an underlying resilience to the ZAR which is bound to reflect in the months ahead.

USD overvaluation points to some reprieve for the ZAR in the longer term: 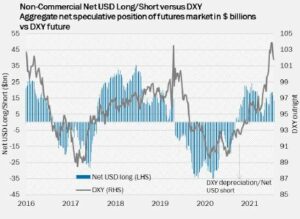 The US dollar is overvalued against all of its major peers. This inherently skews the risk bias towards depreciation over the longer term. We will also very likely see a notable rebuild in USD net long positions in the next round of CFTC data. A bullish net position suggests that while the speculative market is currently bullish, the currency would be prone to a sell-off should sentiment shift and those positions be unwound. The shift in sentiment could come from today’s FOMC meeting if the central bank disappoints what is an excessively hawkish market. If not, then this shift may merely be pushed out further.

The ZAR net position, meanwhile, turned slightly more bullish once again. However, as with the USD, this data does not cover the most recent market moves. As such, we could see an unwind of some stale long positions reported in the next round of CFTC data.