Balance of risks table as per MPC statement

The front end of the FRA curve was little changed after the announcement, suggesting that the market had already priced in the 50bp rate hike. However, some receiver bias has emerged at the long end of the curve. While FRA’s are now off their recent peaks, the rate hike risk priced in remains notably higher than the SARB’s guidance despite the upward revision in the central bank’s interest rate forecasts. The QPM interest rate projections were revised higher for 2022 to 5.30% (vs 5.06%) and 2024 to 6.74% (vs 6.68%). Given that today’s announcement was likely a front-loading of rate hikes which will lead to less aggressive tightening further down the line, the market still seems overly hawkish. We should, therefore, see the FRA curve flatten and spreads compress over the near term.

The front end of the swap curve was subject to some receiving interest following the announcement with the 1y to 2y swap rates retreating. It is also noteworthy that the 1v2y swap spread is trading at levels last seen through Q2 2021. The market is responding to the firmer ZAR currently but is still pricing in sustained inflation and more rate hikes in the coming months, as evidenced by a longer end swap curve that is lagging the move lower. This is represented by the 10v2 swap spread, which is trading at a year-to-date low and its lowest level in more than two years. Economic growth risks could keep longer-dated swap rates lower, and thus, we could see some flattening of the curve in the near term. Given that the market still seems excessively hawkish, receiving at current rates may provide some value to investors.

Post the 50bps rate hike some flattening pressure has emerged along the SAGB curve with bonds broadly firming. More pronounced moves have been observed at the belly to long-end of the curve with the market pricing in the weaker growth outlook amid the downward GDP revisions. The R2048-R186 spread, for example, has narrowed slightly to just below 264bps from 267bps yesterday, suggesting that much was already priced in. However, we could see the curve flatten further in the near term as the ZAR will find some support from the aggressive rate hike, and growth expectations are revised to the downside.

Heading into today’s SARB policy update, there was plenty of two-way risk facing the ZAR. There were good cases for both a 25bp and a 50bp rate hike, and although the market was leaning towards the latter, it was never fully priced in. This was evident in the ZAR’s reaction to the 50bp rate hike that was ultimately delivered, as the currency surged more than 1% before consolidating around a two-week high of R15.8000/$. While some of this move can be attributed to broader USD weakness on the day, the ZAR’s outperformance of its EM peers suggests that the rate hike provided additional tailwinds that could help it sustain the break below the R16.0000/$ handle. 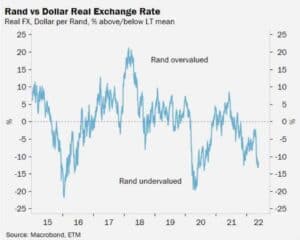 In conclusion, we remain of the view that the market is overly hawkish in its implied interest rate outlook. However, on the back of the dovish statement, we are seeing medium- and long-term interest rate expectations moderate. Our view is that the SARB will hike rates by 25bps at least twice more during the remainder of the year and will then leave rates unchanged going into next year. 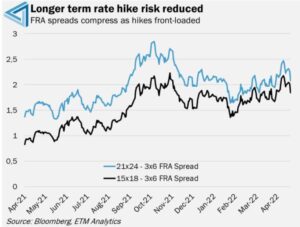