Gold will remain focused on the movements in the dollar and US treasuries for short-term trading bias. Investors with a longer-term outlook will favour accumulating on any dips as a hedge against both the geopolitical and macro-economic risks, which currently include stagflation.

The noble group metals have the slowdown in the global economy and supply constraints playing tug of war with price action. Up until now, concerns surrounding global growth have overshadowed the supply issue.

Economic growth concerns and tighter monetary policy from the likes of the Fed are currently driving the narrative across base metal counters.

Underpinning the longer-term prospects for metals are supply constraints in individual metals such as aluminium, while even further out, the likes of copper remain a buy given the need for the metal in the green energy revolution.

Gold has traded in a range of $1803.90/oz to the downside and $1877.44/oz to the topside for the month of June thus far which is smaller than the $120.00/oz range seen in the month of May. The trend sideways continues with investors unpacking the tighter monetary conditions, stagflation, and geopolitical turmoil in eastern Europe with no end in sight when looking at the Ukrainian/Russian conflict.

The Federal Reserve hiked interest rates by 75 bps which was the largest in 28 years. The headline on CNBC the day after the hike much sums up the broader macro picture at the moment. A day after Powell’s assurances about the economy, markets are worried that the ‘Fed breaks something’. Recession fears are growing and given that much of the inflationary pressures are supply-driven there are concerns that all the Fed is managing to do is take away economic dynamism.

All of that said, we believe that there is a strong case to suggest that the market has overpriced the Fed’s intentions and that we may be seeing rate cuts as soon as 2023.

Thus the strength in the dollar may well be at its peak, and given this and the current macro malaise, we remain core long gold.

Our View: Longer-term investors with a buy and hold strategy remain committed to buying on any dips with levels approaching $1800.00/oz seen as attractive. To the topside $2000.00/oz remains the first hurdle before the door to year to date high of $2070.44/oz is opened.

Platinum and palladium are currently focused on the impact of tighter monetary policy and subdued economic growth informing demand. While the supply side of the equation is focused on the availability of products out of Russia as the sanctions bite, coupled with news that union metalworkers Numsa have announced an indefinite strike involving contract workers at Impala Platinum in South Africa’s North Western Province.

As it stands it is unclear whether or not we can expect supply disruptions, but markets generally price for the worst-case scenario.

Our View: Palladium remains below the $2000.00/oz handle with the ultimate floor being $1500.00/oz. We favour accumulating towards $1800 as bargain hunters have been noted buyers in this area previously. Looking at platinum could find $1050.00/oz toppish for now while value is evident approaching $900.00/oz.

Base metals have had the following macro factors driving price action during June:

Shanghai officially reopened on the 1st of June after hard lockdowns as Beijing followed its zero COVID-19 policy. There are signs that the economy is rebounding however to date Beijing has been reluctant to use rate reductions as a measure to stimulate the economy in the face of other major economies tightening monetary policy. There are also concerns that capital outflow will increase should China cut rates at this time, something policymakers will be loath to see.

One positive is that US President Joe Biden is currently reviewing the removal of some of the tariffs on China enacted during the Trump presidency to ease some of the supply side pressures as inflation runs red hot in the United States. 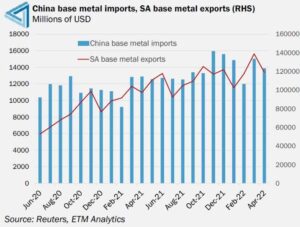 The Fed hiked by 75bp to take the Fed Funds range to 1.5% – 1.75%. This was the largest hike since 1994, and aligns with new wording in the statement that says that the Fed is ”strongly committed to returning inflation to its 2% objective.” There was one dissenting vote, coming from Kansas Fed President George, who voted for a 50bp hike.

The new dot plot projections released showed sharp increases from the March release, with the Fed Funds target rising to 3.4% by the end of the year and 3.8% by the end of 2023. The prior forecasts were for a rate of 1.9% for the end of this year and 2.8% for 2023.

In terms of economic projections, the unemployment rate is expected to rise to 3.7% by the end of the year, while the growth forecast was cut to 1.7% for both this year and next, compared to 2.8% for 2022 and 2.2% for 2023 projected at the March meeting.

Therefore, there may not be the “soft landing” that the Fed had been hoping for since it embarked on its hiking cycle.

Powell’s press conference, meanwhile, saw some interesting developments. During the Q&A, the Fed Chair suggested that although another 75bp may be on the table for the next meeting, such moves will not become commonplace. Powell also noted that it was decided to do more “frontloading” of hikes now to contain inflation expectations.

Therefore, the next CPI releases will be key. Any slowdown in inflation should then take another 75bp hike off the table.

The question here is, has the Fed done too much too quickly? The Fed has been behind the curve for a while and this level of increase may be too swift a move for corporate merica to tolerate after decades of cheap money. 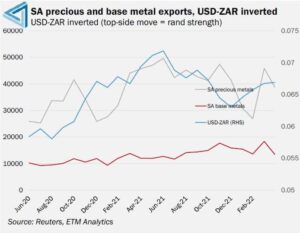 From potential strike action in Chile to bottlenecked ports, the supply chain globally is stretched.

The Chinese Vice Commerce Minister Wang Shouwen was quoted saying the following at a press conference in Beijing, “Logistics efficiency has dropped, supply chains are not running smoothly and soaring raw material prices have put firms involved with
international trade under pressure.”

Most prominent metals of the month: 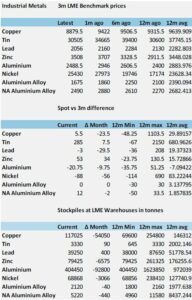 Lead
The lead market in Europe has been under pressure with LME inventories remaining at
near 2007 lows of 39250 tonnes. This is partly as a result of less lead arriving from Russia following its invasion of Ukraine, but equally as a result of the closure of the 155,000-tonne Stolberg smelter in Germany following serious damage from flooding in 2021. Russia exported 110 000 tonnes in 2021 with around half of it going to Europe.

That said, there is some good news on the horizon and that is China coming to the rescue.

China has a surplus of lead and this is expected to cancel out the deficit in the physical market this year. Chinese inventories are sitting at 87830 tonnes, up 5860 tonnes from the 10th June 2022. What is frustrating the process is the transportation bottlenecks which should ease in the latter half of 2022.

Our View: The lead market will remain underpinned by the supply constraints in the EU driving the narrative on the LME. We expect $2025.00/tonne to provide the first major support level for the metal.

Aluminium
Aluminium inventories at LME registered warehouses are at 17-year lows and they are expected to drop further in the coming weeks as more of the metal leaves the system heading for Europe where supplies are scarce. European smelters have not been able to produce at adequate levels given the massive surge in energy costs. LME stocks are currently at 404450 tonnes compared to a month ago when they were at 532 500 tonnes. When we last updated this report of 532 500 tonnes, analysts have pointed out that even more concerning is the on-warrant stocks, which is the metal available to the market at 166 575 tonnes is the lowest on record and likely to fall further.

Our View: The market has taken it on the chin with the 3m benchmark slipping below the $2500.00/tonne psychological level. That said, at some point, the fundamental low inventories will start to play a role once more. Support can be found at $2416.00/tonne which is a prior low in the 3rd quarter of 2021.

Copper
Concerns surrounding global economic growth have been the major theme driving copper prices over the past month. The 3m LME contract has slipped below the $9000.00/tonne mark as thoughts of stagflation hit the global bellwether for economic growth.

It is hard to argue for a long position in copper at the moment but we certainly are not of the view that we reach COVID-19 lows.

We think that the world’s Central Banks will be mindful of sending their respective economies into recession and may well pull back on the hawkish rhetoric towards the backend of 2022 into 2023.