We are on record as having forecast a general decline in the price of crude oil for the second half of 2020. Our overriding rationale for this stance is that we believe the optimistic views of a swift return in global economic activity is overdone. Substantial headwinds remain in place.

Our note sets out the case for our thesis. The evidence we present is in our minds compelling.

The first reason that led us to propose this price trajectory is price technical. Since the blowout lows of April oil recovered strongly at first but in July and August that May / June momentum slowed considerably.

Our view is that oil’s lack of progress on the topside is entirely consistent with the performance of assets such as emerging market currencies and bonds that have certainly recovered from their March and April lows, but a full retracement to January levels is most likely impossible for the rest of the year and into 2021.

One only has to examine the state of the airline industry to get an idea of how permanently impaired demand is likely to be for a period extending well into 2021.

July 2020 consumption is was estimated to be almost 70% below July 2019 levels. This fact alone has led us to believe that the much-touted ‘V-shaped’ recovery is receding in likelihood every passing week.

Anecdotally, Emirates airlines have just entered into a second round of swingeing job cuts by not renewing contracts for cabin and cockpit crew. 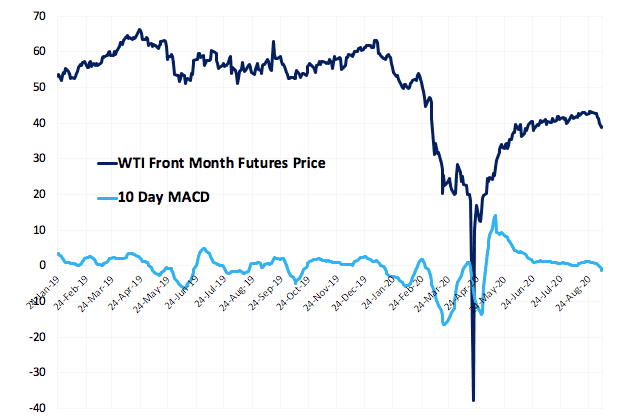 A second reason is that Cushing Oklahoma oil stocks remain close to the highs set in the last downswing in oil price starting in May 2014. At present this stands at 50 million barrels excluding the Strategic Petroleum Reserves in the United States which stands at 650 million barrels. 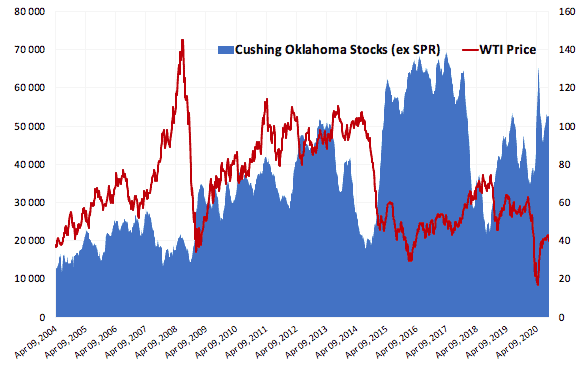 Thirdly, and perhaps equally important factor is the recent activity of Saudi Aramco, the largest oil company in the world.

State oil producer Saudi Aramco is cutting its benchmark Arab Light crude more than expected and lowering the grade to a discount for the first time since June for buyers in Asia. It’s the second-consecutive month of cuts for barrels to Asia. Aramco will also trim pricing for lighter barrels to northwest Europe and the Mediterranean region.

Aramco is reducing pricing to Asia for October shipments of the Light grade by $1.40 a barrel, to 50 cents below the regional benchmark. The company was expected to pare pricing by $1 a barrel, to a 10-cent discount, according to a survey of eight traders and refiners.

Aramco had supported the rally in May and June by raising prices whilst simultaneously reducing production levels.

Now, faced with softening demand the Saudis are moving to act in their own interests having bowed to the political pressure from the United States and Russia in April to reduce supply and put a floor under the oil market that was on its knees. 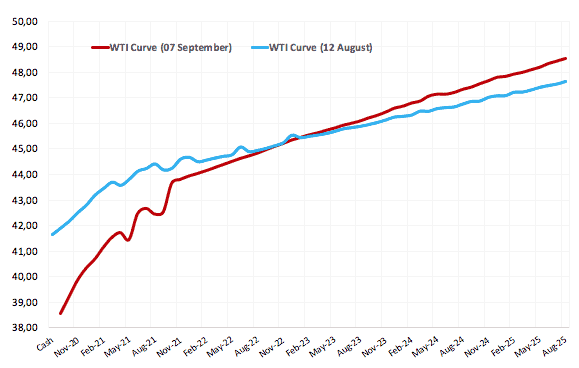 Our view on the short to medium-term oil price trajectory is validated by a change in the shape of the WTI futures curve. Almost one month ago the front end of the curve was US$ 2-3 higher than the current level.

At the same time, the longer end of the curve has moved higher than the August levels. The curve has steepened (in the oil universe this state is referred as a contango – front end below long end prices.)

If the contango is steep and steepening it implies there are no short-term supply constraints and/or demand is unlikely to draw down aggressively on existing stockpiles.

A montage of graphics drawn from the US Energy Information Administration’s August report reveals a thematic which largely confirms the view that we hold. We disagree with the shape and extent of the recovery in global consumption for the second half of 2020. 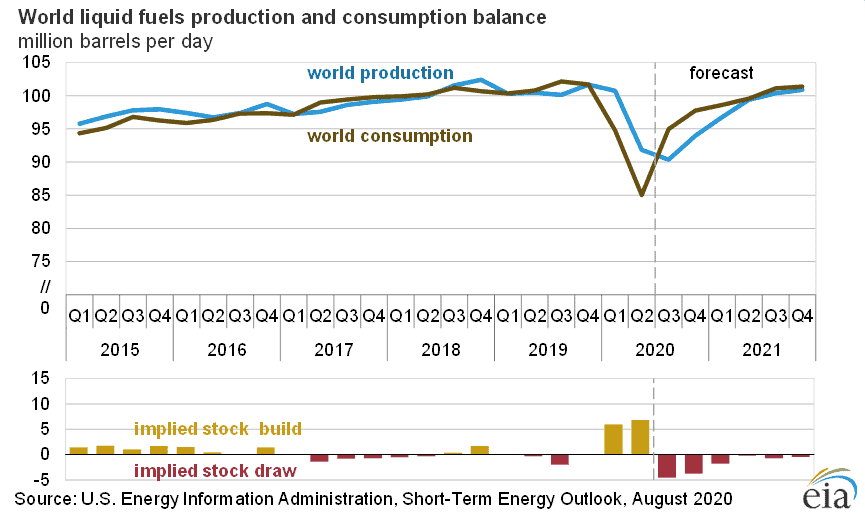 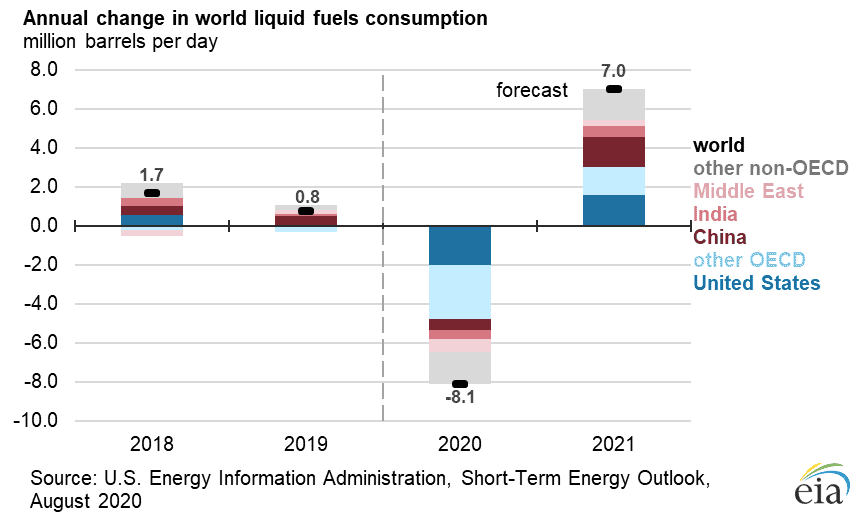 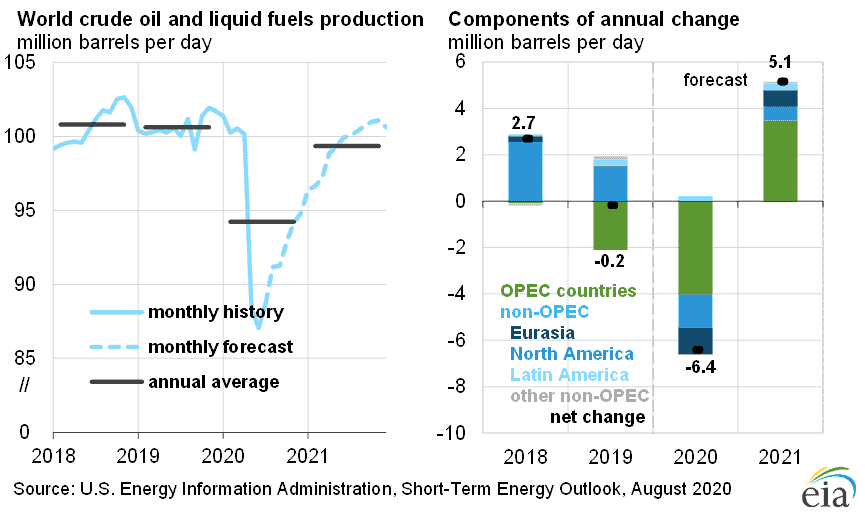 The chart immediately above best reflects our view for the next 6 months. There is a flood of OPEC spare productive capacity to just waiting to hit the market in the event that an unanticipated increase in demand runs through the larger than usual stockpiles held around the world.

Monitoring components of aggregate national GDP components are central to the formation of our thesis. To this point, the release of German Industrial production numbers seems to validate our view.

Against an expectation of a 4,70% increase, actual production came out at 1,20%. At best we describe the recovery in the German economy, the workhorse for the Eurozone has been in progressing fits and starts. Not a backdrop which supports a thrust higher in global oil prices. 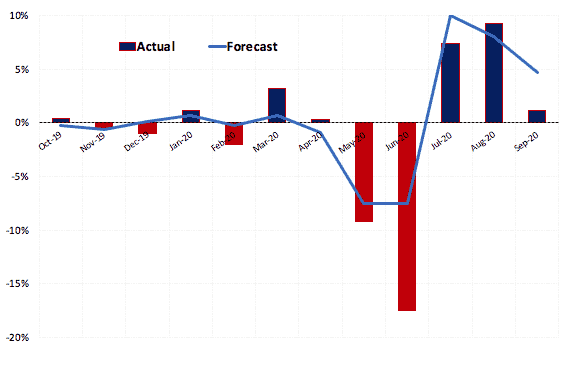 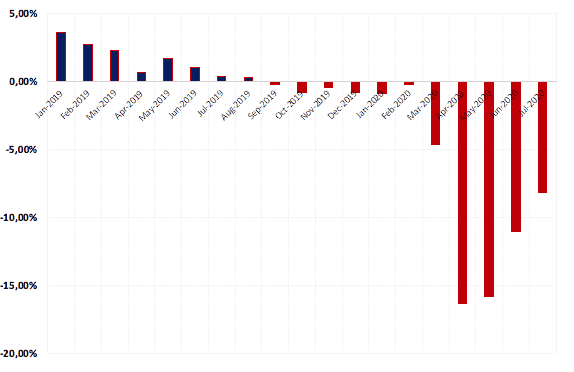 As you would expect US Industrial Production fell off the side of a cliff in the first six months of 2020. Our attention is drawn however to the anemic performance that pre-dates the Covid-19 period.

In fact, trend industrial production was unambiguously lower throughout 2019. It is difficult to reconcile this trend coupled with the collapse in the first half of this year with a strong ‘V-shaped’ recovery for the latter half of 2020.

Our view for global oil prices for the rest of 2020 is that the downside beckons. We do not anticipate revisiting the lows of April, but a return to US$ 25 -30 / barrel for West Texas Intermediate (WTI) is not improbable. Against that, a rise above US$ 50 / barrel, a likelihood of very low probability, is in no way obvious to playing out for us.