The Most Serious ‘Game’ of our Lives

Game theory is the study of how people and businesses behave in strategic situations. That is when they must consider the effect of other people’s responses to their own actions. The South African government, over the last decade, has behaved as if there were never going to be consequences for repeated flawed strategic decision-making.

By virtually any metric South African government finances are in disarray. An already vulnerable position has been exacerbated by the entirely unexpected Covid-19 global pandemic.

Any excuses offered that the coronavirus is the source of our woes must be dismissed out of hand. Blaming the pandemic for all our woes is the same as blaming the police for catching you drunk driving when in fact you have been in the bar for six hours.

The consequences of our choices now confront us. Long-dated South African bond yields are in absolute terms some of the highest for a decade. In relative terms, where close on US$ 16 trillion of bonds are trading with a negative yield, our comparative position is indeed desperate.

This note covers the various incarnations of South African fiscal and economic vulnerability. From Debt-to-GDP, annual fiscal deficits, and the lack of fixed capital formation over the last decade clearly illustrates the nature of the existential threat posed to South Africa’s prosperity.

Covid-19 has posed some of the most serious questions that have faced the global community since the end of the Second World War, now seventy-five years ago.

At the heart of government policy-making this year has been what level of financial and economic destruction must be paid in order to manage and contain the spread of the Coronavirus, thus, hopefully, minimising the eventual death toll.

Each country, and indeed each progressively smaller community, has had to assess what the appropriate response to the pandemic should be pursued, attempting to reconcile the awful consequences of any decision.

We caught a short interview with Mohamed El-Erian, formerly CIO at PIMCO and now Chief Economist at Allianz, which encapsulates the quandary we all now face. A progressive global lockdown and gradual easing of restrictive conditions were intended to be a one-shot game. The pay-off to that game may be such that it is impossible to play again.

And yet there are many countries who are having to contemplate, that the applied Covid lockdowns have failed to achieve the desired-for health gains and the even to-date economic costs have been catastrophic. South Africa has arguably not reached peak infection rates and yet here we are moving to a Level 2 lockdown status. We believe the government does not have the stomach to reimpose even marginally harsher restrictions. The social revolt, in any case, would be too great to resist.

So, have we failed?

Well as was the case at the start of the pandemic all of us are operating in a state of ‘incomplete information’. Are we condemned to a new reality where there are repeated outbreaks of global viral outbreaks? Or is this as bad as it gets, and we are now on a new glidepath to prosperity?

Without any doubt, in our mind at least, the rules of the game have changed. The greatest utility, profit or broader gain will go to those who first grasp what the new rules are.

The purpose of this note is to put into sharp relief how our assumptions and belief systems are going to be challenged in the months and years ahead to first preserve our own economic status and then potentially prosper in relative and absolute terms. For financial market practitioners, how are the likely trajectories of interest rates, currencies, commodities and equities going to be inexorably different from the projected realities we had only six months ago?

South Africa faces a much tougher future than was contemplated even a very short time ago. That does not mean we, individuals and institutions alike, cannot be prosperous. It does require though we at least examine and challenge our old operating assumptions so we that are able to make rational decisions in a new global economic equilibrium.

The following charts are a montage of South Africa’s slide from investor community darling to junk-yield joke. Enjoy! 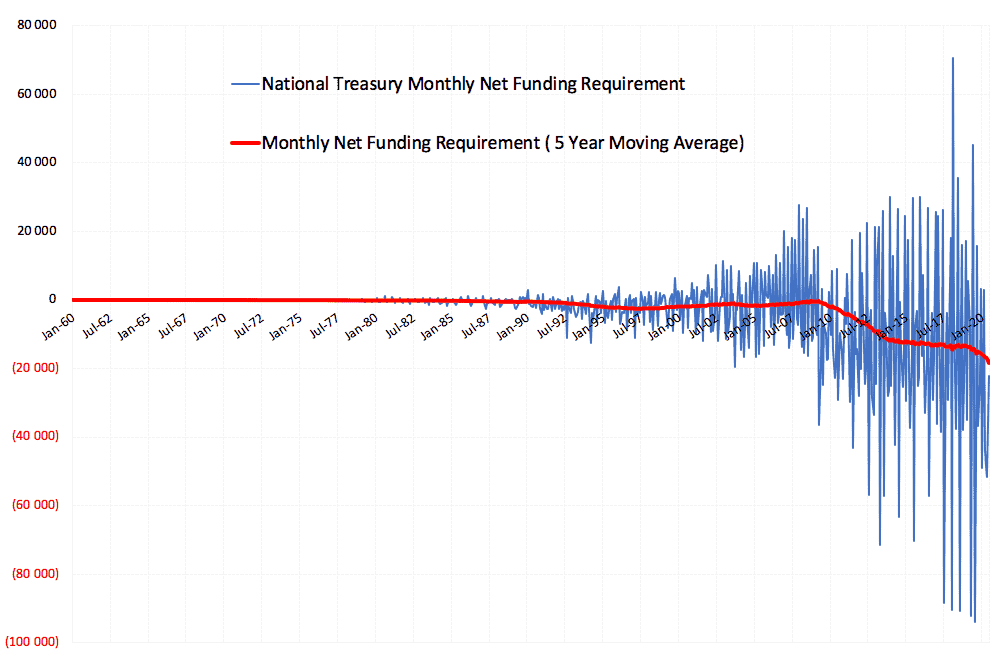 In July 2010 the 5-Year moving average of National Treasury’s Monthly Net Funding Requirement was ZAR 3 billion. Fast forward to June 2020 this number had expanded 6-fold to ZAR 18 billion. And before some one-eyed economically illiterate ANC apparatchik attempts a Covid-19 excuse, the comparable 5-year average had already exploded to ZAR 15 billion in 2019.

To extend a ‘game’ analogy, repeatedly finding yourself behind the eight-ball is no way to put yourself in a winning position, either now or in the future.

If that is not horrifying enough for you, then the table below will definitely make you spill your coffee. In the first 6 months of this year, the cumulative Net Treasury Borrowing Requirement was ZAR 211 billion.

For the same period in 2015, the requirement was ZAR 55 billion. Laughable, if it weren’t so tragically consequential for all of us. Government’s past profligacy forced National Treasury to tap the bond market for ZAR 80 billion in May and June; at a time when 10-year rates are close to the highest levels in the last decade.

Given the continual demand for cash funding, it is understandable the current sovereign yield curve is the steepest in nearly two decades. The short-end is of course anchored by the short-term Repo policy rate while the long-end is registering the fears of a market which increasingly discounts the creditworthiness and credibility of the South African government. 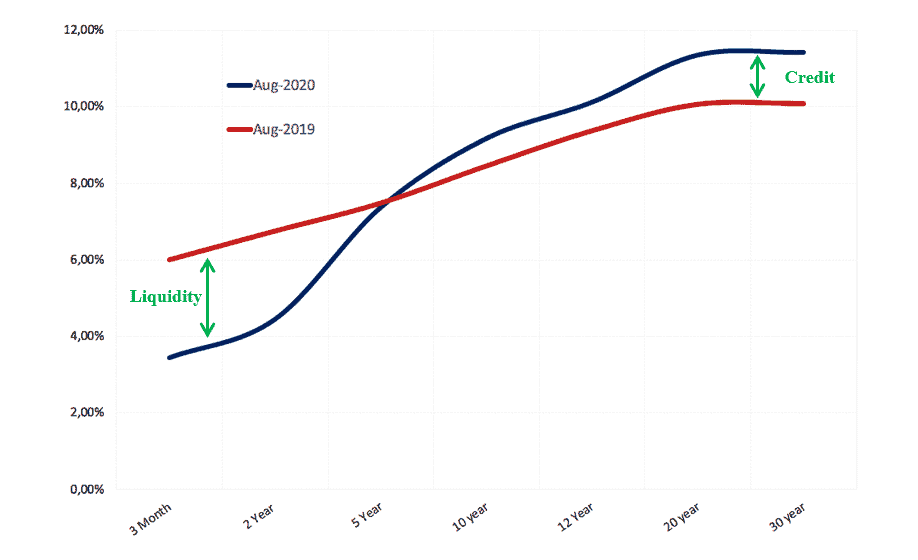 In an increasingly competitive international environment where just Emerging Market countries alone will need to refinance US$620 billion in FX debt, bonds and direct loans, through the end of 2020, past confidence that South African government debt issuance requirements would be easily met, is surely misplaced.

As a further cautionary note for South Africa’s National Treasury is that there may also be a ceiling on investor appetite even for US Treasuries. As developed market interest rates have plumbed and remained at historic lows, think negative yields, debt management offices have rushed to increase the duration of their debt liabilities.

In the latest quarterly auction, (February, May, August, November cycle) for 30-year bonds, the auction coverage ratio was only 2.14 times.

A good indicator of investor demand, or lack thereof, is that the Primary Dealers took up 28.00% of the volume auctioned. These bonds have to be held in portfolio until the Primary Dealers can find a home for the stock, costing the broker-dealers a substantial amount of market risk capital.

If we described South African GDP growth over the last 5 years as irregular, then you could accuse us of being a wild apologist for the economic incompetence of the South African government. As GDP growth has stuttered the government has continued to spend like a drunk sailor. 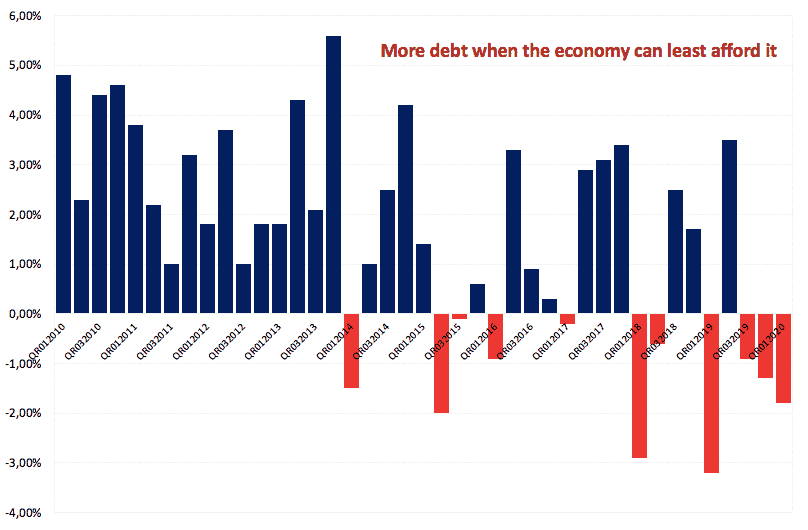 Significantly South Africa’s Corruption Perception Index score is anchored at 44, out of possible 100, or joint 70th of 180 in international rankings. We are accompanied by those paragons of Eastern European virtue, Romania and Hungary.

We may be rugby world champions, but we rank by far the lowest amongst all the major playing nations. Not unexpectedly New Zealand tops the virtuous pile at 87, along with the Scandinavian countries. There is a strong positive relationship between poor fiscal management and corruption in government AND the private sector. 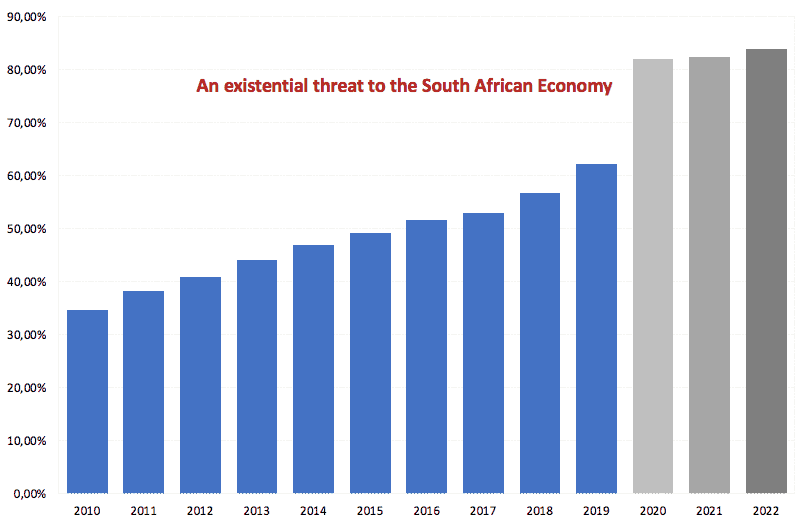 The chart above fairly well speaks for itself. From a level of 35% in 2010, the projected Debt-to-GDP number for 2022 is 84%. A Covid-19 surge in debt is neither unique nor out of line with countries around the world.

BUT, the doubling of the debt-to-GDP percentage over the last decade has crippled in advance the ability of the economy to recover from the disastrous after-effects of the global pandemic.

What happened to putting money away for a rainy day? That rainy day has well and truly arrived, and the cookie jar is already empty.

If you thought that wasn’t bad enough then consider that what is not incorporated in the debt-to-GDP numbers above. All the guarantees offered by Central Government to support the venerable State-Owned Enterprises, innocuously referred to as ‘Contingent Liabilities’ will total ZAR 1 trillion by 2022, according to National Treasury estimates. And they should know.

The country’s fiscal deficit is projected to explode to 15.00% by 2022. A dramatic widening of the deficit is to be expected in the wake of the Covid-19 crisis. BUT, again, we start off from an incredibly weak fiscal position.

The consolidated deficit for 2019 was 6.30%. The Primary Deficit, net government spending before debt financing, is also set to grow rapidly, but interest payments are expected to consume a rapidly increasing proportion of government expenditure, effectively crowding out infrastructural and social spending aspirations. 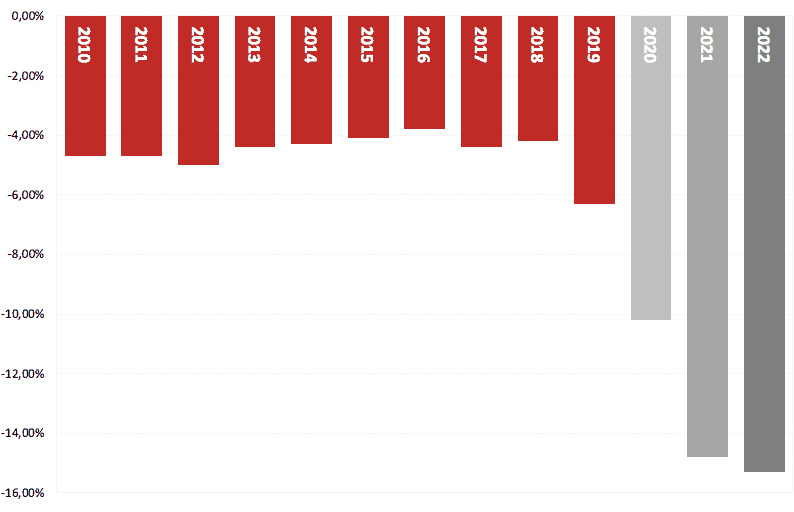 The OECD definition of Gross Fixed Capital Formation (GFCF), is

What the definition does not articulate is that GFCF is a tight positive function of industrial and commercial confidence in the economy and economic prospects. The quarterly performance for South Africa, (chart below), over the last decade is as disappointing government spending and fecklessness.

Low capital formation reduces the capacity of the economy to grow strongly in the future, or even grow at all. Taking the quarterly volatility out the equation, the average formation rate over the last decade is 0.15%. Not to make too fine a point, that performance is absolutely pathetic. This medium-term number include the investment boom of 2011 when the quarterly average number was 2.16%. 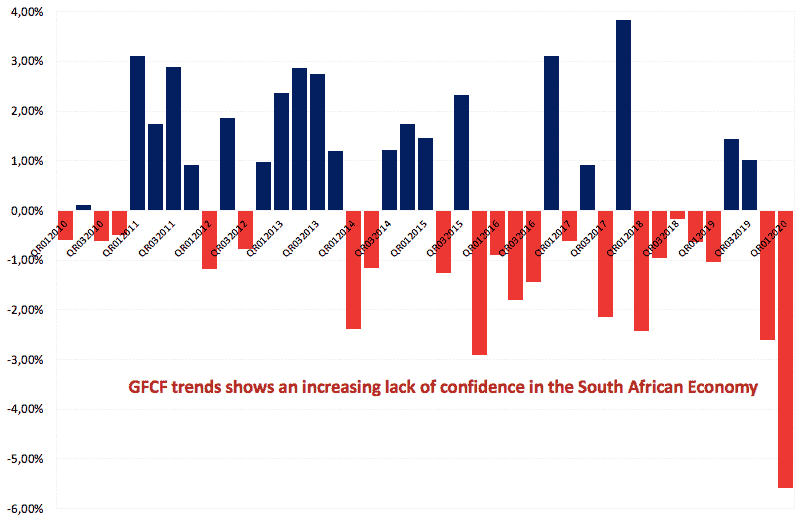 South Africa’s fiscal position is dire. Going into 2020 the fiscus was already under strain. Lump in the after-effects of the pandemic, as tax revenue collapsed, while government expenditure surged has put the economy in grave danger of dropping into a poverty trap condition, where South Africa lives from hand to mouth for the next decade or more.

As any street beggar will tell you that living dependent upon the kindness of strangers doesn’t make for a strong negotiating position.

From a financial market perspective, we believe it is unreasonable to expect that medium or long-term South African bond yields are coming down in the foreseeable future.

The SARB may well hold the short end of the curve lower for longer but that is going to have little to no impact on term yields as the supply of bond assets apes a Tsunami each and every auction.

Our view is that the South African government bonds should be sold on any strength as the competition for international investor favour is going to be more intense than ever before.

To borrow a phrase from the popular press, we all exist in a new economic normal. Debt supply, governmental and non-financial corporate has exploded in an unprecedented manner.

From a game theory perspective, South Africa has to operate in a multi-round game, where it is perhaps one of the weakest players at the table.

The cost of that weakness is going to be felt most keenly in the cost of servicing existing and new debt.

Global Oil market is set for an extended period of soft prices
September 8, 2020
Go to Top